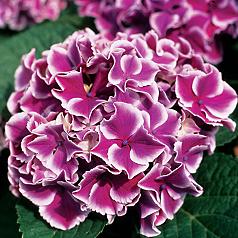 For many years now Hydrangea have been one of the most popular perennials in American gardens.  The variety of these shrubs that is available is quite impressive. Far from being just the one-colored puffballs that you remember from your grandmother’s garden.  There are 23 species, but of these only five are widely available in the US.  The five that are available represent a great variety of flowering perennials, with an option that is right for almost any American gardener.

The one that you’re most likely familiar with is the Hydrangea macrophylla (more commonly called Garden or French Hydrangea.

These plants produce impressive bounties of flowers.  The color of the flowers can be changed from red or pink to white or bright blue by adjusting the chemical content of the soil in which they’re growing.   Many of the new varieties are much more interesting, as well, including the Miss Saori Hydrangeas and Blue Enchantress Hydrangeas.

are the most cold-hardy of the common species.  They are the largest type as well, some growing to fifteen feet.  These Asian natives are often pruned into tree form and sold as “trees.”  They bloom in mid-summer, usually with large white flowers on six- to eighteen-inch panicles.  In some varieties the white flowers mature to pink.

There are two species that are native to the US.  The larger of the two is the Oakleaf Hydrangea (Hydrangea quercifolia).

Much like the Panicle Hydrangeas, Oakleafs bloom with large white panicles that mature to pink or rose.  These flowers come sooner, in early summer, and are smaller, on four- to twelve-inch panicles. They are often grown primarily for their beautiful foliage, which matures to a deep bronze in fall. Oakleafs are the only common ones to produce significant fall color.

The smaller American native is the Smooth Hydrangea (Hydrangea arborascens).

These can be found in the wild from New York to Florida, and are nearly as cold-hardy as the panicles. They are much better adapted to warm weather.  They grow to four or five feet high. In early to mid-summer produce large round clumps of bright white flowers that sometimes mature to a lovely pale green.  These shrubs are most often used in mass landscape plantings to striking effect.

The fifth (and most unusual) species is the Hydrangea anomala, or Climbing Hydrangea.

These are true clinging vines that can grow to astonishing size.  They’ve been known to climb structures and buildings as high as eighty feet tall. Which, in full bloom of large white lacecaps, is a truly awe-inspiring sight.

Check out our new bulbs. Perfectly self-contained, bulbs are easy to plant and carefree growers.

Don't wait to order! Many of our new and most popular varieties will sell out. We'll ship your order at the appropriate time for planting in your area and we don't process your payment until your order ships.